My Dad has a deep love of nature, always has I think. My childhood memories include birdwatching walks around local reservoirs, throwing small pieces of soil in the air at dusk to watch the bats dive for them, having a ‘pet’ elephant hawk moth caterpillar, feeding it on bay leaf willow herb until it pupated and then watching it emerge as a moth before setting it free. Photos of me as a child in our garden often involved me standing next to a prized pot of lilies or carnations grown from seed. Nature and the outdoors is deeply embedded in my Dad and I think that has passed on to me. I think Mother Nature is probably central to my own spirituality. 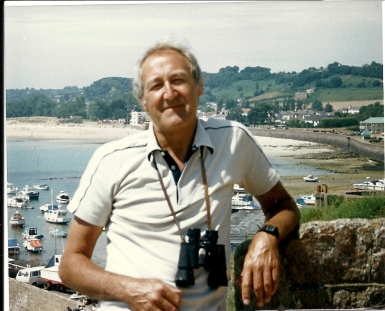 Dad is a quiet man, who likes solitude and quietness. He’s sociable but on his own terms and does not suffer fools gladly. I think some people may have found my Dad aloof and maybe sometimes rude, I don’t think that worried him too much. I have fond memories of my Dad as a child but think his role as a Granddad to my son was where he excelled completely. For some years he literally was my son’s best playmate. We have photos of him prised into a small pop up tent, wearing a Santa hat building jigsaws and Lego, playing in the garden with a huge inflatable football that dwarfed my son. 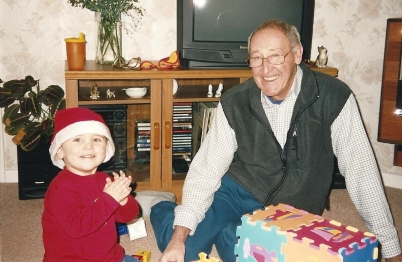 My Dad worked as a machine mechanic in a hosiery factory all his working life. I wonder how he survived in a factory environment, he would have been better suited as a park ranger or a gardener. He provided well for my Mum and me. He did his National Service in the Army Catering Corps serving in Germany, he cooked omelettes for thousands of men and chocolate eclairs for the officers. Dad enjoyed sport – playing football and cricket in his youth, a spell of race walking and then graduating to flat green bowls. People liked playing bowls with my Dad, he was calm and encouraging.

Mum and Dad were a double act and had many shared interests. They complimented one another well, Mum more sociable and outwardly appearing more confident. Dad more calm, thoughtful and cautious, capable around the home with DIY, gardening and finances. Both were hospitable hosts and were a stable base for me through the inevitable ups and downs of growing up.

Dad enjoyed his red wine and settled in an evening most often preferring his headphones on with the radio, rather than the TV. He loved listening to Leicester City football commentary on Radio Leicester. If it had been an eventful game we would chat about it on the phone.

In a Blog about my Dad it seems important to offer a pen portrait of him in order to read future posts within the context of his life. A central theme to my work as a researcher and practitioner in dementia care focuses on the importance of life story work (see associated resources on my website).  It is a theme that I’m sure will be a critical thread running through these posts.